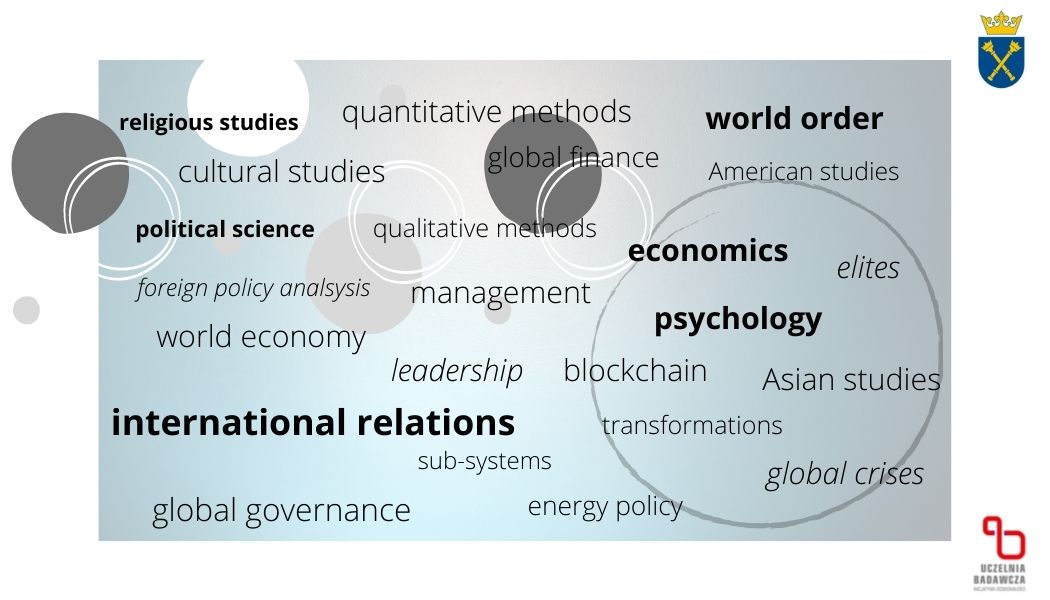 The main area of ​​GCS LAB research are complex political, economic and social systems, taking into account the importance of transformation determined by the digital revolution and digitization of international space in the 21st century. The system can be understood as a set of multi-level interactions between system elements in a specific structure (at the level of individual entities - people, sub-units - e.g. corporations, groups, units - mainly states, subsystems - e.g. regional and systems), assuming that at each level there are a number of determinants (e.g. psychological, sociological, religious, legal, etc. determinants of behaviour at the individual level, which affect other levels). The complex systems approach allows us to study the way in which the relations between the individual components of the system cause its dynamics and how the system interacts and creates relations with the external environment (the use of theoretical and methodological tools from social, science, engineering and humanities allows for a full understanding and explanation of the operation of such systems). The starting point for LAB research is the significance of technologization and digitization adopted as the main factors influencing systemic changes in the areas of selected public policies (economic, foreign, healthcare, security, social communication or decision-making processes during political and economic crises).

The international system in the 21st century has undergone numerous transformations, and the complexity and multidimensionality of the world determine the need to apply complex research thanks to the adaptation of complexity theory. Due to the vastness of the issues raised, the creation of the LAB enables the analysis of many current and dynamic issues, which increases the innovation of future projects. The project will therefore allow the integration of research activities dispersed between various departments, guaranteeing the integration of scientific activities within the Jagiellonian University and with international partners due to its interdisciplinarity. In addition, work on the project enables the creation of the GCSL brand, which will guarantee the recognition of scientific activities both in the national and international environment, including through affiliated research results and publications. Digitization and digitization of the international system is one of the most important variables that determine the nature of international relations in the 21st century, at the political, social and economic levels. On the other hand, the participation of new actors in international relations (non-state, transnational, multinational corporations) determines systemic transformations of a multi-level nature. Therefore, the main task of the LAB will be the simultaneous study of intertwining spheres and the transformation of the international system using instruments characteristic of DigiWorld: mathematical and econometric models or machine learning algorithms. Thanks to the use of such an approach, it is possible to study the issues of artificial intelligence with a particular emphasis on political, economic and social processes. In political terms, it will be possible to study systemic transformations, with particular emphasis on the transformations of global relations - limiting the possibilities of superpowers and supra- and international organizations, the emergence of regional powers; their effectiveness in dealing with both political and economic crises. An important aspect of the research remains the importance of systemic centralization during the identified crises. This allows the effectiveness of the existing models to be verified. Thanks to this, it is possible to analyze the interactions between subsystems further - which determines the studied changes and what transformations result from them.