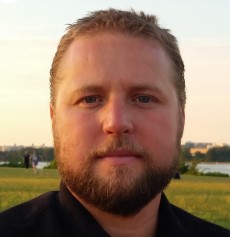 Chris Adamczyk is a 20-year law enforcement and intelligence community veteran from the United States. Over half of his career has been in the intelligence and counterterrorism disciplines where he worked in two information fusion centers and the U.S. Department of Homeland Security National Operations Center in Washington, DC. Since 2009 Chris has focused on digital networks built by criminal and extremist groups operating in the United States, Europe, and Canada. Chris is considered a subject matter expert in extremism, domestic terrorism, and internet source exploitation. Chris is a staff lecturer for the Arizona Counter Terrorism Information Center on the topic of extremist ideologies and iconography. Chris is a frequent guest lecturer for the International Association of Law Enforcement Intelligence Units, and several community colleges in Arizona. He is also a lecturer for the Jagiellonian University in Poland. He graduated with honors from the Naval Postgraduate School in Monterey, California with a Master's Degree in Homeland Security and Defense. He was awarded the school's three highest awards at graduation; Curtis Straub, Mark Carr, and Outstanding Thesis. His thesis was titled, “Gods versus Titans: Ideological Indicators of Identitarian Violence.”